If you don`t know what Kuryr is by now, shame on you! please check out our OpenStack Tokyo Kuryr Introduction talk or read my blog post about it.

Mitaka was the first actual release that we fully worked on Kuryr and i wanted to describe some of the nice features that we support in our current version.

In this post i will describe the ability to attach elements to existing Neutron/OpenStack resources which is useful for many different use cases, in the next part i will describe our Kubernetes integration and nested containers/Magnum support which are two really nice features we have in late progress stages.

The following diagram depicts the current components we have in Kuryr: 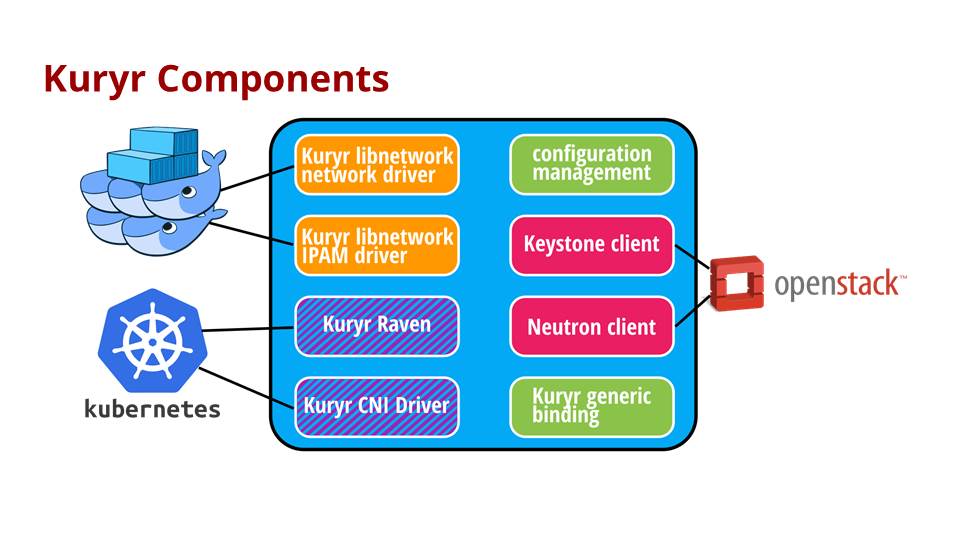 As you can see Kuryr already has full integration working with Docker libnetwork and with Docker Swarm as a by product of the above. What we essentially do is implementing a libnetwork remote driver and IPAM driver that maps the Docker calls into Neutron resources and model.

This works well and as user creates new resources like networks in Docker these networks are created in Neutron on the fly and Kuryr keeps the mapping between the two entities. However, we have noticed that we can provide much more by allowing users to attach their newly created Docker network into an existing Neutron network.

Allowing to attach into existing networks enable this very useful ability which users really need and want. The ability to connect VMs, containers and bare metal servers to the same virtual network in a seamless management experience and have a consistent networking for all the three.

There are many reasons why you want to do that and there is no real good reason why you should`nt be able to do it, connecting your OpenStack and containers workloads together and applying a unified security, isolation and policy profiles on them.

This simple feature in Kuryr allow all of the above using Neutron as we should soon see.

Another use case that i hear a lot about are users that wants to deploy batches of containers and want to do it as fast as possible. Sometimes with many different networks and newly created ports.

What we noticed is that the API calls to Neutron in these cases can be time consuming and slow down this process, this is a common problem for any networking plugin implementation.

By pre-allocating networks/ports in Neutron and then only binding these elements from their pools when the user needs (when the user uses the Docker API or any other orchestration/management tool that does) we are able to improve this process quite significantly.

Attaching to existing Neutron resources feature enable us to provide and achieve this.

The following steps demonstrate how to use this feature with Kuryr. First we create a Docker network using Docker CLI API and specify to Docker to use Kuryr as the networking driver and IPAM driver. 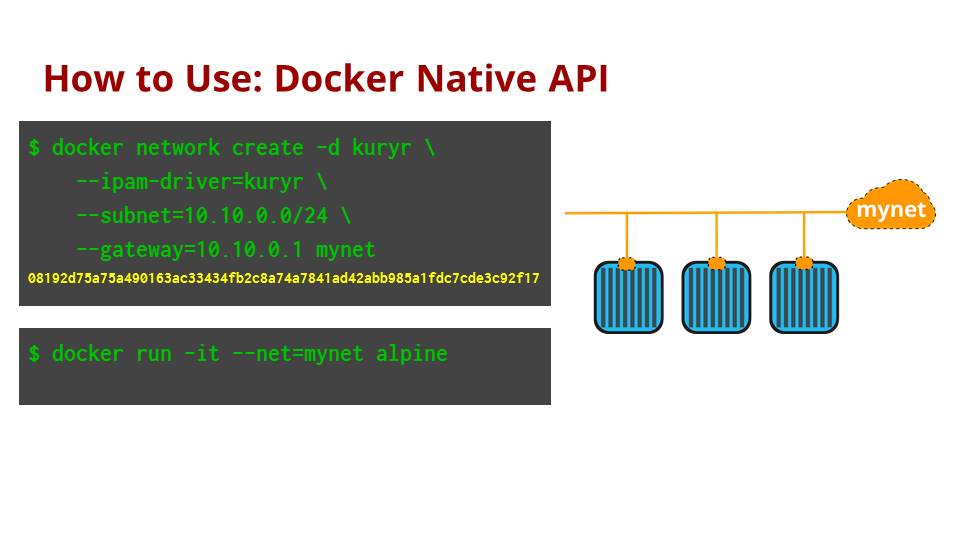 If we look at Neutron, we can see that a new network was created with “kuryr” in its prefix 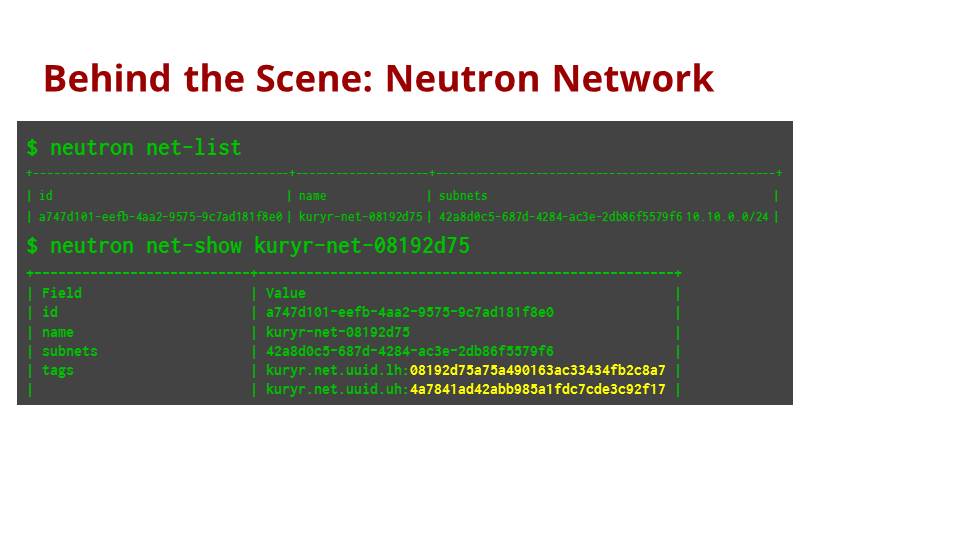 We can see that Kuryr save the mapping between Neutron network id and Docker network id using a new feature in Neutron called resource tags. This is a feature that was designed by the Kuryr team and implemented in Neutron exactly for a use case like this (and many others as described in the spec).

You can read more about this feature in this document.

What we see above is that the user creates a network in Docker and it is automatically added to Neutron by Kuryr with the appropriate mapping, any new container that is added to this Docker network will be attached to the same Neutron network.

But what if there is already a Neutron network that already has few VMs attached to it. The user can specify the network name or network id as a Docker options. Kuryr instead of creating a new Neutron network will attach the containers to the existing network. 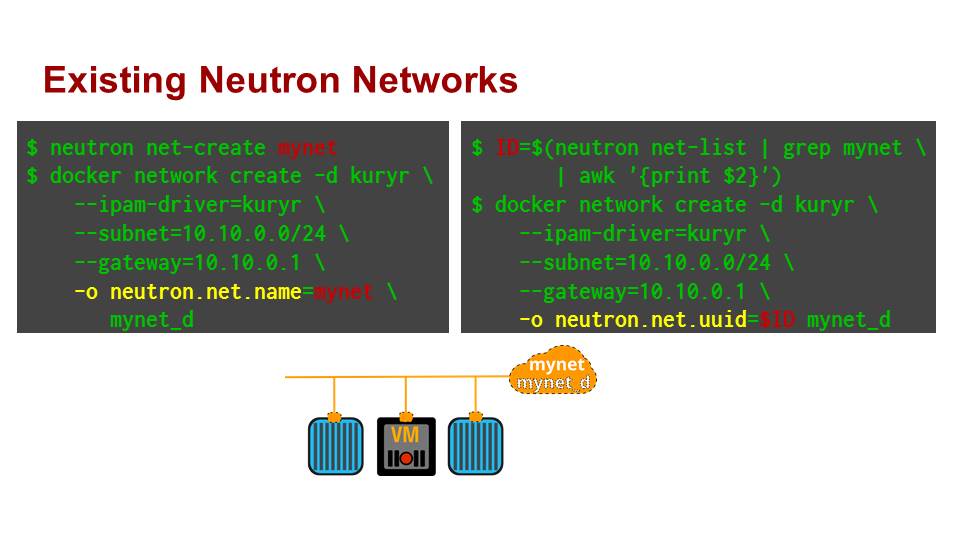 We can see that Kuryr keeps a special tag on the network to indicate that this is not a network created by Kuryr. This is important as we dont want to delete this network when the user delete the Docker network, just remove the associations (tha mapping tags on the Neutron network). 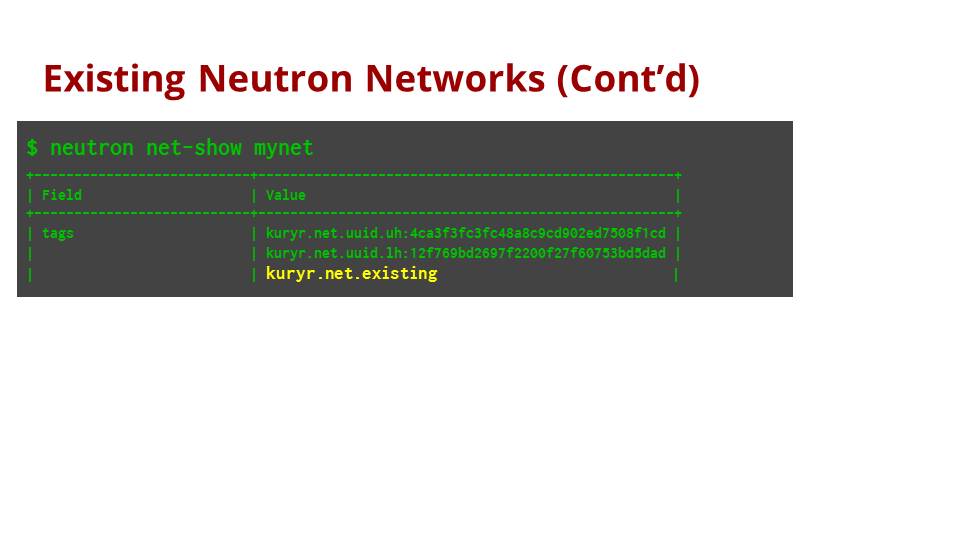 Currently, Kuryr only support attaching to existing networks from one Docker control plane, for example only from one environment of Docker Swarm. However, we see strong use cases that users may want to connect containers to the same network from two different Docker Swarm instances for example.

Enabling this is rather simple with the above feature, we will just need to manage tags per a Docker Swarm environment, this is something we are looking to support really soon.

I think this post demonstrate the power of Kuryr and how we can help and simplify life for users that deploy OpenStack workloads mixed with containers workloads in a very easy manner.

In the next posts i am going to describe other exciting features we are working on like Kubernetes Integration and Nested containers support.