If you are not familiar with project Kuryr, you can read this introduction blog post before continuing. In this post i will show you the basic results of our progress thanks to a recent virtual sprint the project had, in this post we will see how thanks to Kuryr, docker libnetwork API is mapped to Neutron API and with OVN as the Neutron plugin backend, containers networking is established.

It is important to note that any other Neutron implementation could have also been used here instead for example the reference OVS implementation, Midonet or others.

As i write these lines Docker decided to change their libnetwork API yet again, but i think this is still relevant because it shows the concept itself rather then the details which we already work on changing in project Kuryr. You should note that some of the code presented here is still in review process and not merged yet, we plan to have this work by OpenStack Tokyo summit and i will then write another “Getting Started with Kuryr” post, describing the steps needed to reproduce everything showed here.

1) Have a single node devstack installation with OVN running. This of course doesnt have to be OVN, Kuryr is transparent to the Neutron backend and only uses official Neutron and Neutron services APIs.

2) Clone project Kuryr git repository and install it and its dependencies.

Change the values according to your devstack configuration.

4) Create a subnetpool with name kuryr, this is a temporary solution until we support IPAM within Kuryr

What happens now is that Kuryr server should run and is auto discoverable by Docker. You must have Docker experimental branch installed (supports libnetwork remote drivers).

Creating Docker network and a service

right now Kuryr is binded as a remote driver to Docker with OVN as its networking backend. We can start issuing Docker CLI commands and see them mapped into Neutron API and implemented by OVN.

The result of this command is the docker id for the created network, we currently use this id in Kuryr as a name to create the Neutron network. I am currently proposing a Neutron extension that will support adding tags to Neutron resources. With this feature we could hopefully use the same use friendly name and add this ID as a tag. (We also need a way to receive the used docker name in Kuryr, currently this information is not being pass to the remote driver implementation).

We also plan to use the tags feature to support pre-allocation of networks/subnets and ports in Neutron and attach them on demand to containers.

If you noticed the above command had the -d kuryr syntax in it, this tells docker to use the Kuryr libnetwork remote driver.

Next step will be to publish the service foo

If we now look at Horizon UI, we can see the network and subnet are added to Neutron

We can see the added network with the Docker id as its name and the subnet attached to it. This docker API maps to the end point creation hook and triggers a relevant neutron port creation. Kuryr doesnt need to re-create the subnet every time a new end point is added but only at the first time and reuse the same one in consecutive calls.

Running a container and attaching it to the service

The next step will be to run a container and attach this container to the service we just created. This should allocate an IP to the container using Neutron IPAM and bind the container namespace to the “networking infrastructure”, in our case OVS bridge.

And then attaching this container to the created service

What happens here is that the “Join” API is called for Kuryr libnetwork remote driver and what it does is bind between the container namespace external vEth pair and the OVS bridge. (at this point the Neutron port is already created).

In order to do that Kuryr has a generic VIF binding framework which knows (by configuration) to call the appropriate script for the binding depends on which Neutron backend is configured. (This is simulating the same thing that Nova does when creating a VM on a specific host).

We can see from the screenshot that the service is attached to the network correctly, and we can see that the port and network are also added to Neutron using the Neutron CLI. 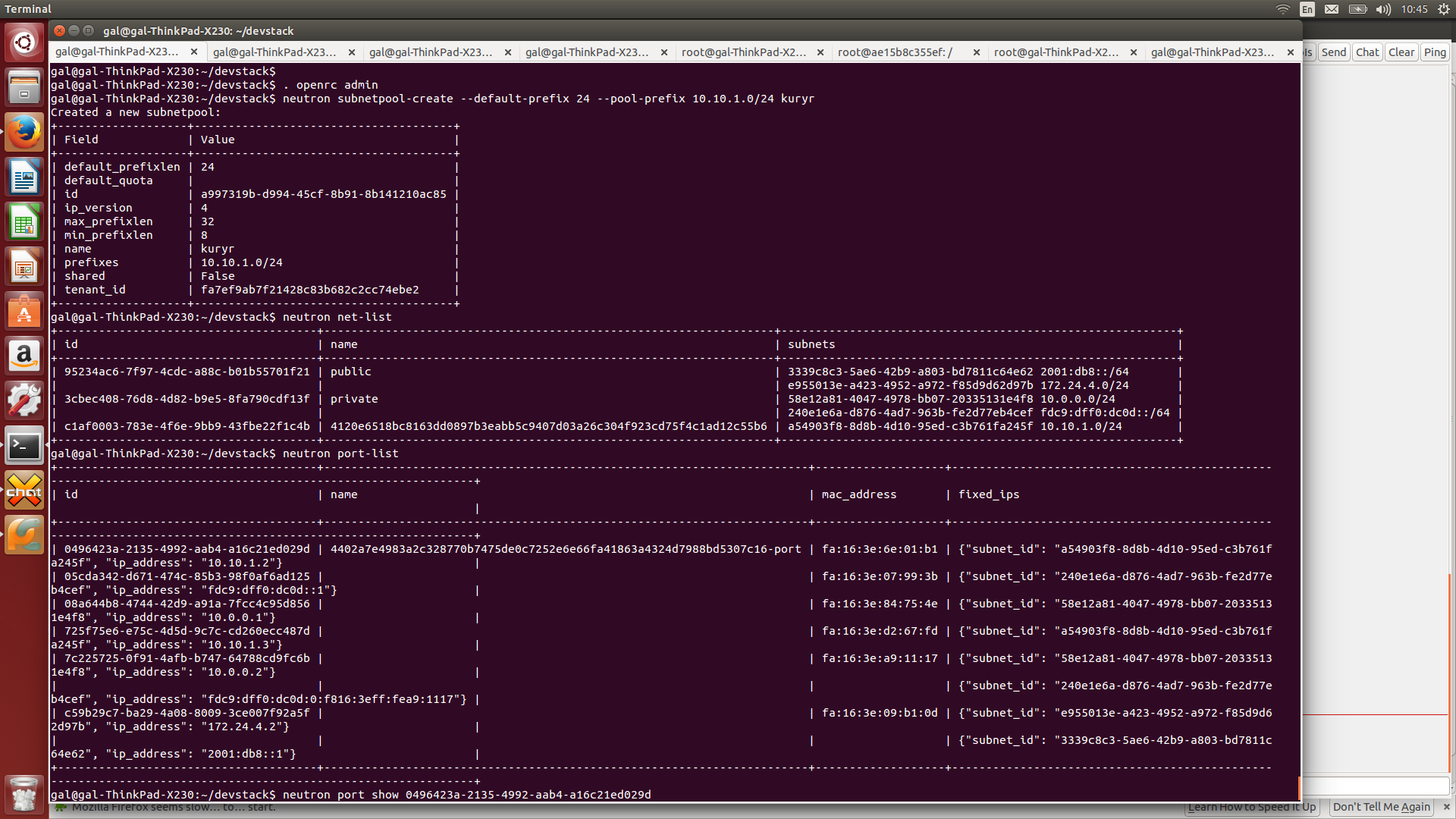 If we look at the container interfaces, we can see that we have an eth0 interface with an IP allocated by Neutron

What happens when we attach the container to the service is that Kuryr calls the OVS Binding script and this adds the external part of the container veth pair to br-int and also sets an external id for that interface with the same port id as Neutron port id.

This process simulate what is done by Nova for a VM, OVN controller now notice the added port and knows to link it to the correct Logical port based on the Neutron port id (stored in the external id). This is a similar operation that is happening in pure Neutron with OVN and OVS L2 Agent.

The following screenshot shows OVN Northbound DB as its populated with the added port and network. 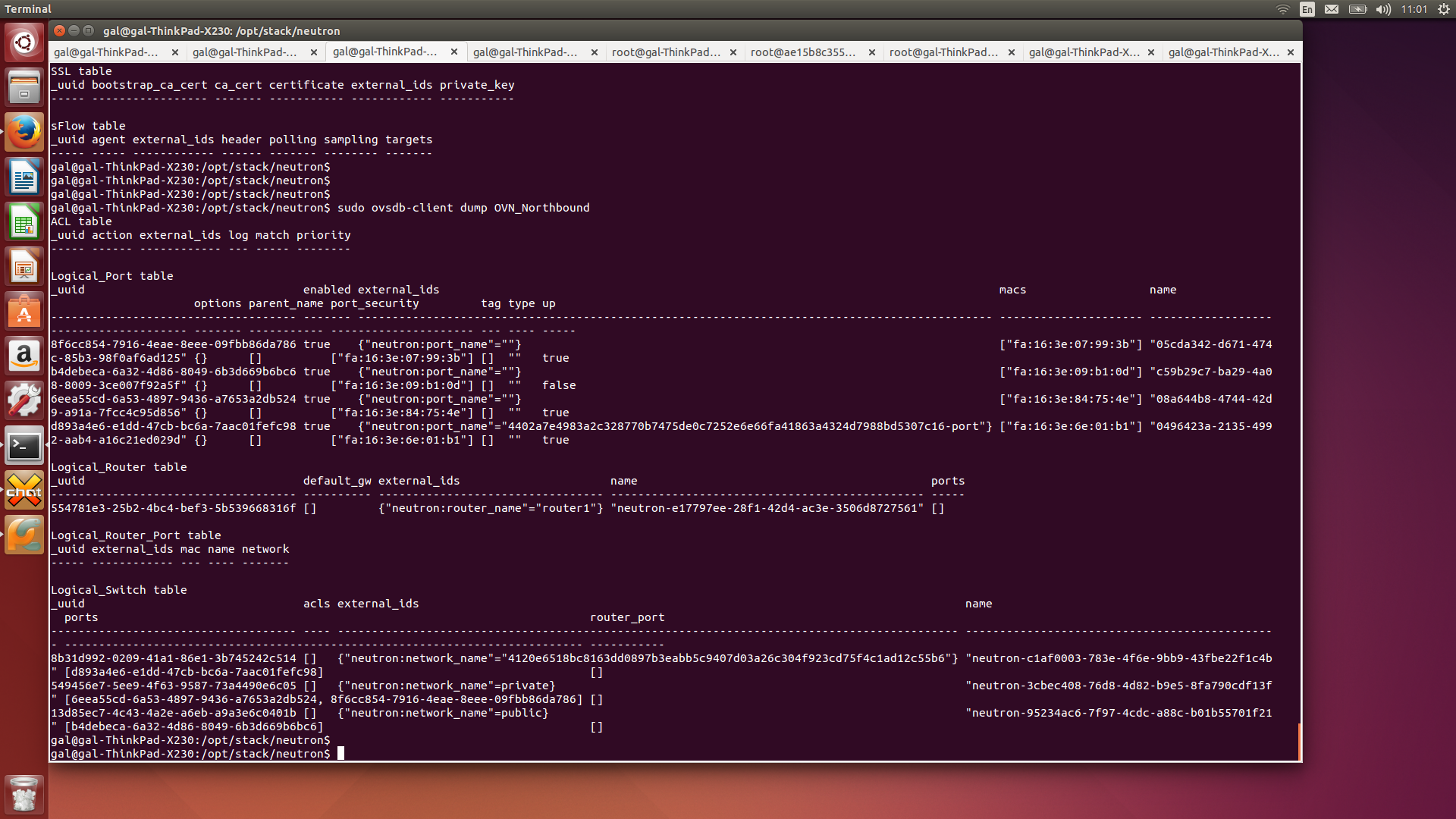 What i showed you in this blog post is just the basic first milestone of Kuryr, i choose OVN as the Neutron backend for this example but this should also work the same with Midonet, OVS L2 agent or any other Neutron plugin. As the Docker libnetwork API changed we are working to adjust Kuryr to the new changes.

We have a very interesting roadmap a head of us, mostly integrating with Docker Swarm for multi node setups, tackling the common use case of nested containers in a VM (and integration with OpenStack Magnum), And leveraging Neutron features and services for containers networking.

If you are interested in the project, we welcome anyone to join us in this effort. You can keep track of Kuryr Trello board for our progress or read Kuryr Neutron spec to understand the road ahead of us.